As a child and young adult I was very independent. Regardless of the situation, if I was doing something I was determined to do it myself and not ask for anyone's help. In my eyes asking for someone's help was akin to admitting defeat or somehow showing others that I was weak or incompetent. My attitude was "If someone else can do it, I can do it". How Naive. 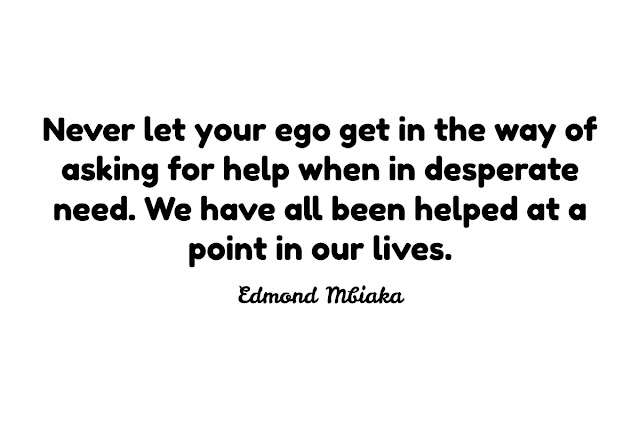 Now I am a Father of two beautiful children. My daughter is wiser at 19 than I was at that age. If she is having difficulty with something she promptly asks for help and willingly accepts it. She's a lot like her mother in that regard. My son at 17 is a lot more like me; in his mind asking for help is a form of "giving in" and somehow shows him as weak. We had an incident this weekend which underscored his being a chip-off-the-old-block. He was in a drama performance at his high school on Friday night. After the performance many of the kids decided to go out for an after-performance snack. My son decided to go but got lost looking for the restaurant. He drove around for over an hour trying to find the place but didn't find it. He ended up coming home disappointed that he missed out on the social time.

The next morning, my wife and I talked to him about what happened. I asked him several times, "Why didn't you call us for help?" To him, that would have been a sign of weakness as he decided to forge ahead on his own without soliciting our assistance. We stressed to him the importance of asking for help, that asking for help is not a foolish thing; not asking for help when you really need it is foolish. As Cat Stevens sings in Cats in the Cradle "My boy's just like me; he's grown up just like me".

As PM's, there is plenty of times where the problems we face warrant us asking for help. Too often the cry for help either comes too late or not at all because the PM wants to try to work his way out of the jam without admitting he is over his head. Then there are times when the PM throws up the flare at the slightest hint of a problem and doesn't even try to solve a problem herself. She immediately dumps the problem at her boss' footstep expecting the boss to solve her problem for her. Either way the ask for help was inappropriately used by the PM.

My one nugget to you is this: when you get into a sticky situation on a project, don't be afraid to ask for help from others that have similar or more experience than you. Do a quick assessment of the problem, decide if you've got the experience to solve the problem on your own, then either move forward with solving the problem, ask for advice from a colleague on how they would handle the problem, or ask for help because the problem is bigger than you are. Going it alone just means that there may be a bigger mess to clean up later because the mole-hill you tried to fix yourself has grown into a mountain.

Lonnie Pacelli is an accomplished author and autism advocate with over 30 years experience in leadership and project management at Accenture, Microsoft, and Consetta Group. See books, articles, keynotes, and self-study seminars at http://www.lonniepacelli.com