Since the dawn of history, various extraordinary phenomena have been recorded as happening amongst human beings. Witnesses are not wanting in modern times to attest to the fact of such events, even in societies living under the full blaze of modern science. The vast mass of such evidence is unreliable, as coming from ignorant, superstitious, or fraudulent persons. In many instances the so-called miracles are imitations. But what do they imitate? It is not the sign of a candid and scientific mind to throw overboard anything without proper investigation. Surface scientists, unable to explain the various extraordinary mental phenomena, strive to ignore their very existence. They are, therefore, more culpable than those who think that their prayers are answered by a being, or beings, above the clouds, or than those who believe that their petitions will make such beings change the course of the universe. The latter have the excuse of ignorance, or at least of a defective system of education, which has taught them dependence upon such beings, a dependence which has become a part of their degenerate nature. The former have no such excuse. 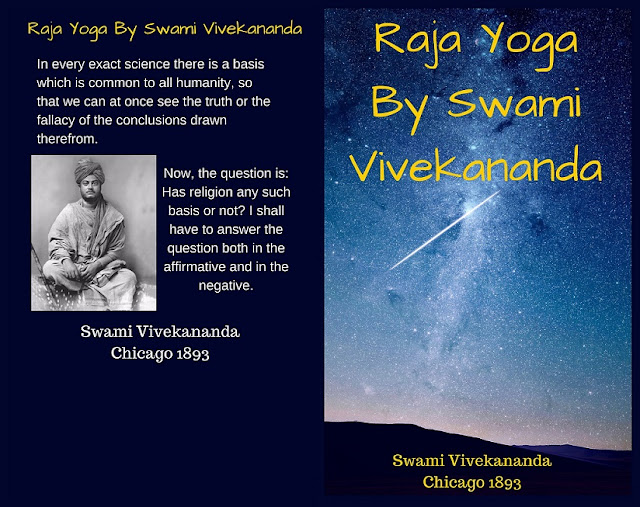 For thousands of years such phenomena have been studied, investigated, and generalised, the whole ground of the religious faculties of man has been analysed, and the practical result is the science of Râja-Yoga. Raja-Yoga does not, after the unpardonable manner of some modern scientists, deny the existence of facts which are difficult to explain; on the other hand, it gently yet in no uncertain terms tells the superstitious that miracles, and answers to prayers, and powers of faith, though true as facts, are not rendered comprehensible through the superstitious explanation of attributing them to the agency of a being, or beings, above the clouds. It declares that each man is only a conduit for the infinite ocean of knowledge and power that lies behind mankind. It teaches that desires and wants are in man, that the power of supply is also in man; and that wherever and whenever a desire, a want, a prayer has been fulfilled, it was out of this infinite magazine that the supply came, and not from any supernatural being. The idea of supernatural beings may rouse to a certain extent the power of action in man, but it also brings spiritual decay. It brings dependence; it brings fear; it brings superstition. It degenerates into a horrible belief in the natural weakness of man. There is no supernatural, says the Yogi, but there are in nature gross manifestations and subtle manifestations. The subtle are the causes, the gross the effects. The gross can be easily perceived by the senses; not so the subtle. The practice of Raja-Yoga will lead to the acquisition of the more subtle perceptions.

All the orthodox systems of Indian philosophy have one goal in view, the liberation of the soul through perfection. The method is by Yoga. The word Yoga covers an immense ground, but both the Sânkhya and the Vedanta Schools point to Yoga in some form or other.

The subject of the present book is that form of Yoga known as Raja-Yoga. The aphorisms of Patanjali are the highest authority on Raja-Yoga, and form its textbook. The other philosophers, though occasionally differing from Patanjali in some philosophical points, have, as a rule, acceded to his method of practice a decided consent. The first part of this book comprises several lectures to classes delivered by the present writer in New York. The second part is a rather free translation of the aphorisms (Sutras) of Patanjali, with a running commentary. Effort has been made to avoid technicalities as far as possible, and to keep to the free and easy style of conversation. In the first part some simple and specific directions are given for the student who wants to practice, but all such are especially and earnestly reminded that, with few exceptions, Yoga can only be safely learnt by direct contact with a teacher. If these conversations succeed in awakening a desire for further information on the subject, the teacher will not be wanting.


The system of Patanjali is based upon the system of the Sankhyas, the points of difference being very few. The two most important differences are, first, that Patanjali admits a Personal God in the form of a first teacher, while the only God the Sankhyas admit is a nearly perfected being, temporarily in charge of a cycle of creation. Second, the Yogis hold the mind to be equally all-pervading with the soul, or Purusha, and the Sankhyas do not.