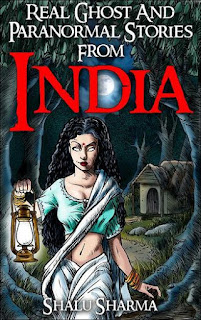 
My Great Grandfather And The Churail
My Out Of Body Experience
The Haunting In The Mirror
Death Pact With God
Ghost Near The Bedside
Possession By A Dead Man’s Spirit
Ghost In The Toilet
Email ThisBlogThis!Share to TwitterShare to FacebookShare to Pinterest
Labels: Books, eBook

Mahatma Gandhi was the most important leader of Indian nationalism in British-ruled India. He led India to freedom peacefully using a method called “Ahimsa” or non-violence. His methods inspired movements for civil rights and freedom movements across the world. Here’s a time line of events in the life of the great leader.
Mahatma Gandhi For Kids And Beginners

1922 – The British authorities arrested and tried Gandhi for seditious acts. After a huge trial, Mahatma Gandhi was sentenced for 6 years.
1930 - Mahatma Gandhi organises a Salt-March, a 200 mile march from his ashram in Ahmedabad to the coastal town of Dandi in Gujarat to break India's Salt Laws forbidding an Indian to make salt. He makes salt and was arrested.
1932 - Mahatma Gandhi fasts to prevent the creation of so called “untouchables” of India as a separate electorate by the British.
1933 – He decides to help the untouchables.
1934 - He launches an organisation called the “All Indian Village Industries Association”.
1942 - Mahatma Gandhi begins the nationwide "Quit India Movement” for complete Independence of India. Was arrested and imprisoned.
1944 - Mahatma Gandhi's wife Kasturba Gandhi dies at the age of 74.
1947 - India becomes an independent country.
1948 - On 30 January,  Mahatma Gandhi was killed at a prayer meeting in Delhi.

Mahatma Gandhi For Kids And Beginners

Bhangarh Fort is considered as one of the most haunted places in India. When a list of the most haunted places of the world is compiled then Bhangarh Fort always comes up on the list in the most haunted of places. The place is so haunted that even the Government of India’s organisation the “Archaeological Survey of India” has put up a board in Hindi asking people not to enter the area after sunset and before sunrise. Those disobeying the orders will have to face the consequences and the law. This is a very strange signboard if you ask me.

The story of Bhangarh Fort in Hindi The video below was made by a popular news agency and they show interesting stuff about the place. The news teams went to Bhangarh Fort with professionals that used gadgets to find what the truth was about this place. They found that there was some kind of negative energy emanating from certain rooms of the Bhangarh Fort. In fact, these negative energies seem to be coming from the very places that were thought to be the most haunted. In one of the rooms where heaviest negative energy was coming out, it is thought that was the room where Rani Ratnavati used to live. Although, they were not able to figure what these energies were but nonetheless these energies seemed to be very profound and watching some of the gadgets at work was very fascinating indeed. Despite nothing was found, these energies do seem to suggest the presence of some entity whatever that maybe. For now, we can simply say that it’s just inhabited by snakes and bats and the occasional wild animals. In addition to this, they also took photos of the entire place and showed that there were orbs in some pictures. Funny thing is that the orbs were of one particular shape in many of the photos. Why would orbs appear in the same shape in numerous photos? Very spooky!

If you go to Bhangarh that lies about 85 km from Alwar town and about 50 km from Jaipur, you will realise that no one visits this place after dark. You will realise that there are no houses within a mile of Bhangarh Fort. The place is completely deserted. There are no houses and even if there are any, no one lives there. Funny thing is that you will realise these deserted house have no roofs. The roofs have collapsed. The fact is that no one builds houses around the area because of fear. There are some theories behind these fears. I can’t say if these haunted and ghost stories surrounding Bhangarh Fort is true or not but the place certainly has an eerie feeling. Locals say that strange noises can be heart at night in and around the fort, some say that there is a ghost market that springs to life, and some people have claimed to have been slapped while they were in the fort and so on. But many of the locals do not want to talk much about this fort and if you do happen to ask them about the fort then most of them will tell you to stay away from it and give you strange looks. The reasons are simple! Many people have died in the place. But the thing is that there are lots of loose boulders and stones lying around. In fact, the place is an excavation ground and people could have simply tripped over and hurt themselves. Wild animals roam at night because there is a Tiger Reserve called the Sariska Tiger Reserve on the edge of Bhangarh Fort and it is possible that many of these wild animals cross over at night to get away from tigers. No wonder people hear strange noises coming out from the fort at night. In addition, there are many open holes in many of the rooms of the fort. It is possible that those who stayed for the night at the fort could have fell into it and have died. This could be explanation of the missing people who spent the night at the Bhangarh Fort. You are not allowed to stay at Bhangarh Fort after dark Some have tried to stay in the fort after dark and many of them disappeared. There is a pool in the fort and in the summer locals bathe in it. Every year a few of these people die there but this hasn’t stopped them from taking a dip. Some have said that ghostly apparitions have been seen around the pool. Some have even said that the apparition is that of Rani Ratnawati who was a beautiful princess of the fort.
Email ThisBlogThis!Share to TwitterShare to FacebookShare to Pinterest
Labels: Places to visit in India

Are you looking for a India travel guide book then here's a book you can buy. This is my own book and has got everything you need to understand India and make your trip pleasant. Here'a a video I created for you to tell you what the travel guide book is all about.